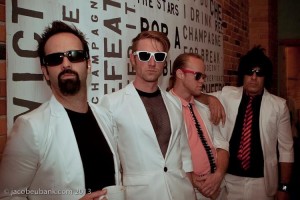 WHITEFISH – Armed with a quiver of synthesizers, effects pedals, crème-colored vintage blazers, and a repertoire of timeless hits, local ’80s tribute band “1985” is reviving the decade of decadence in Whitefish, and doing so in earnest.

With a flair for theatrics and a quasi-sincere belief in time travel and quantum tunneling, the four-piece ensemble opens each show with a short video documenting its displacement – via a freak, inter-dimensional space-time continuum accident – from 1985 to its modern existence in Whitefish where retro is decidedly still relevant (recent shows have featured throngs of dedicated fans whose garish, neon-clad wardrobes of leg warmers, sweat bands, fish nets and collarless fitness tees hail from a not-so-distant generation).

Convinced they are a rock-and-roll set from the past, the band members rarely break character, and distance themselves from the usual ilk of synth-pop cover hits and Billy Idol re-quickening acts by ensorcelling crowds with a stock of dance songs that are at once obscure and recognizable – a la Peter Schilling’s “Major Tom,” Midnight Oil’s “Beds are Burning,” David Bowie’s “Let’s Dance,” and Gary Numan’s “Cars” – and which are played to near perfection.

Populated with classically-trained musicians and bristling with pedals and synthesizers that helped mold the foundation for new wave artists such as The Cure and Roxy Music, the band’s stock of songs is the stuff that was common place in those Yamaha-riddled days of decades yore. And the schtick works.

The band’s stunts include incendiary on-stage arguments that have, during recent shows, convinced onlookers that they are on the verge of a permanent schism, while the video skits revisit their time-bandit adventures with convincing authenticity.

“In the summer of 1985, a mildly talented unknown cover band was playing a show at Poochie’s Pet Wash and Espresso Bar in San Bernardino, California,” goes the onscreen introduction, which exhibits a VH1-style behind-the-scenes themed narration by band leader Nick Spear. “Bass player Charlie Bird had just purchased what he thought was ‘a really bitchin’ chorus pedal’ at a local pawn shop. But that night at the gig, when he stomped on the pedal for the first time … the entire band disappeared, never to be seen again.”

They reappear in Whitefish, so the story goes, and the rest, they hope, is history – though a history with relevance in the now.

“We’re searching for the right combination of pedals to teleport back to 1985, but so far we just keep teleporting to other venues in Whitefish,” says Spear, a fixture in the local music and theater community.

In addition to guitarist and vocalist Spear, aka “Slice,” the band consists of keyboardist Don Caverly, aka “Tommy Perfect,” drummer Marco Forcone, aka “The Force,” and bassist Matthew Bussard, aka “Charlie Bird,” whose bass pedal mishap was ostensibly responsible for tearing a wormhole through time that, fortuitously, landed them in Whitefish.

Spear, who played in a previous band that opened up for ’80s-era stalwarts Missing Persons and Flock of Seagulls in the mid-’90s, and who has a Master in Fine Arts in Theater, also writes original music, but wants the momentum of 1985 and its unique stage act to transcend the trend of ’80s cover bands by featuring “a seamless multimedia experience.”

To accomplish that, the members of 1985 accompany their show with a synchronized stream of video and audio bytes featuring recognizable pop culture elements from the decade, be they excerpts from memorable John Hughes’ films like “The Breakfast Club” to accompany the band’s cover of Simple Minds, or “Ferris Buehler’s Day Off,” which tracks along with Yello’s “Oh Yeah,” to which Spear sings through an identical effects pedal. Other familiar dashes from the era might include the Wendy’s “Where’s the Beef” slogan or Max Headroom’s “Catch the Wave” Coca Cola commercials.

“We want to bring the party every time,” Spear said. “When we play, there’s no pretense. There’s no fear of appearing to be stupid. It’s a cover band. How seriously can you take yourselves?”

Caverly, a full-time musician who also teaches music in the Flathead Valley, said his involvement in the band, beyond the time-travel element, was born of his love for ’80s-era synthesizers and the genre itself.

“It’s better than ever,” he said of the new wave genre. “It’s no less sophisticated than pop music is today. All these ’80s songs are full of choir patches and synth strings, and the Yamaha DX7 was at the forefront of synthesizer technology during that time. It has all those classic sounds built into it. You couldn’t be in a ’80s band without having a DX7. That was the classic synth. And I’ve got everything from a DX 5 to

Forcone, originally of Anaheim, Calif., also a full-time musician who played with numerous bands in the ’90s, said the pleasure of playing with a band whose primary aim is to entertain is liberating.

“For us, when we play, there are no worries,” Forcone said. “We get to play hit after hit after hit, which makes it extremely fun.”

Bussard, the bassist, has been working to compile hours’ worth of video that will synchronize with the stage show and present an analog to the decade-spanning ’80s set, and the synth-pop immersion has been rewarding to bandmates and spectators alike.

“The end goal is to have three big chunks of medley, where we can build three hours of both video and sound” to accompany the set, he said. “It just won’t stop.”